The flight from Helsinki arrived at Malaga airport at five minutes past midnight. Our flight was the last of the day, so the airport was deserted. The baggage claim hall was also empty, and suitcases from our flight appeared on one of the tapes about 15 minutes after the end of the flight. But then the strangeness started - everyone had already taken their things, and my backpack was still missing. Cursing to myself, and then out loud (there was no soul left in the huge hall) on Finnair, and passenger aviation in General (on a previous trip, my Luggage was lost on the way there and back), I went to look for the Lost-Found office. The problem was that there was absolutely no one to ask. After hall issuing from end to end, I found open only to rack up losses of the airline Iberia - like at Malaga airport there is no single service, you need to contact your carrier. There was nothing else to do, so I went there. The girl glanced at my Luggage receipt, wrote belt 37 on the piece of paper without further words, and pointed where to go. In complete disbelief, I went to look for tape 37 and found it in a separate area surrounded by glass walls. As I passed through the turnstile, I immediately saw my backpack lying desolate on the tape. There was an inspection area on the opposite wall, and I realized that it was a customs control room. I went through passport control in Helsinki, and the Finns loaded my checked baggage in Yekaterinburg onto a plane bound for Malaga. This is the first time I have seen such a thing in the entire history of my transit flights. I suspect that the information about this was on the display of the issue feed, there were some letters running there, but I did not pay attention to them. Live forever, learn forever...and you'll still die a fool. 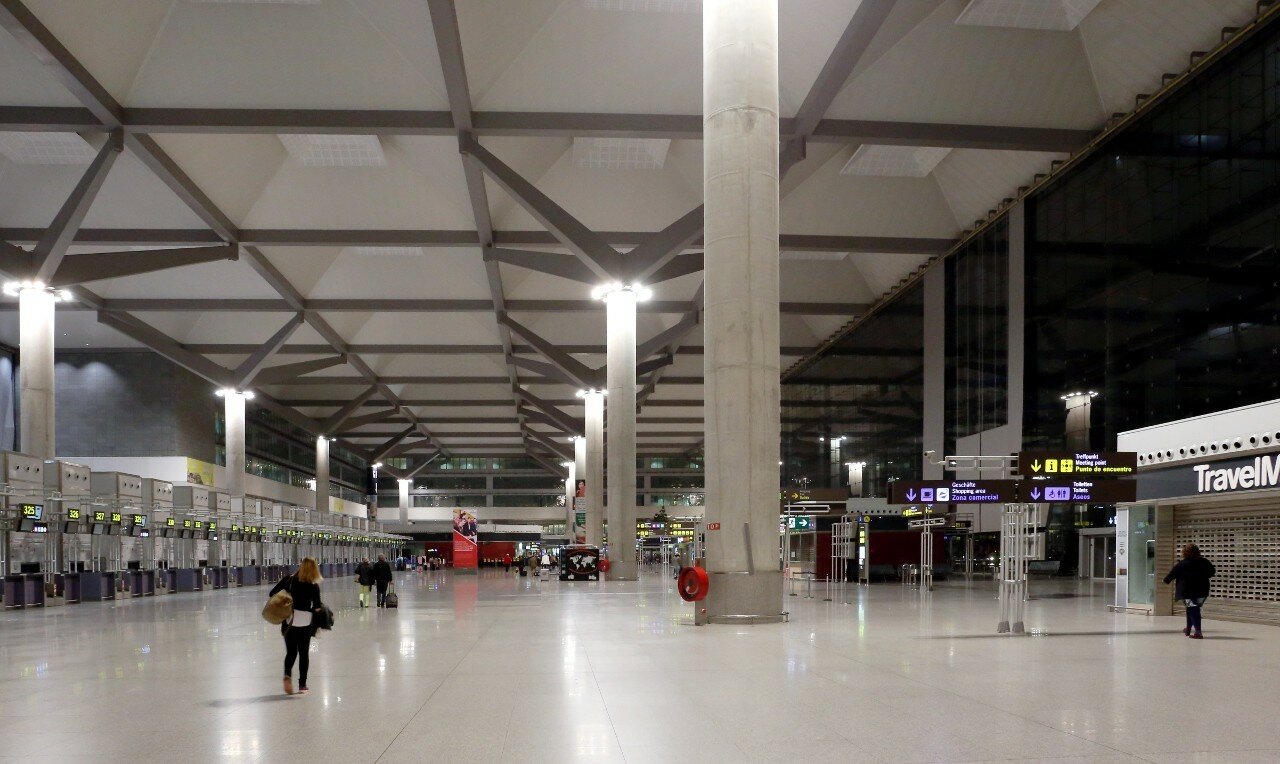 It took me about an hour to do my Luggage, and by the time I got out into the open air, the last train to Malaga had long since left. Taxis are not included in the list of vehicles I use and are not budgeted for, and I also did not book an overnight stay today, deciding that it was better to spend the night at the airport than pay for it for almost the past day. 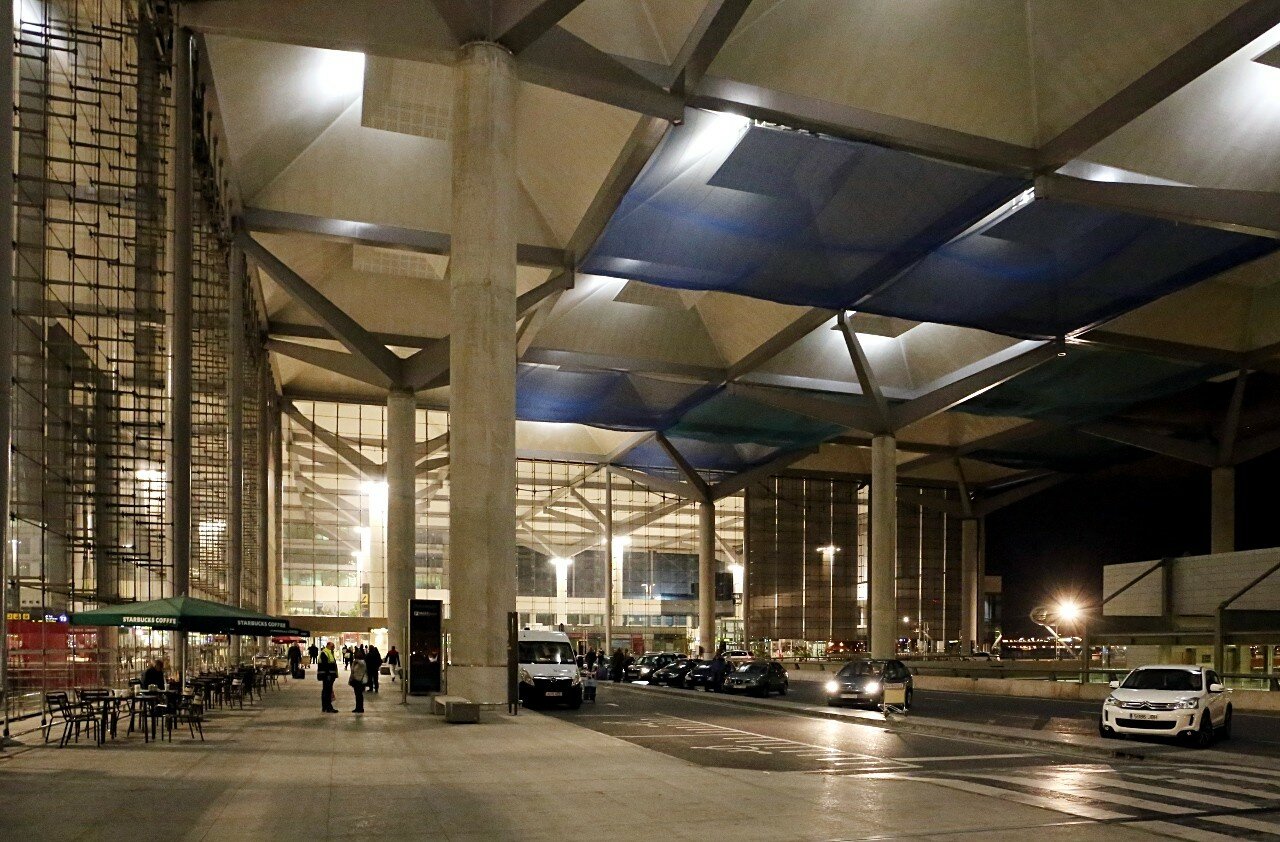 I decided to pass the night in the modern T3 terminal, which was opened not too long ago, in 2010. There weren't many chairs, but there were enough empty ones to make it comfortable. But there was an ambush waiting - the chairs were separated by armrests, and therefore it was impossible to take a lying position. After a bit of thinking, I arranged a bed with the help of a backpack and warm clothes, on which I could put my head and make my legs horizontal. At the same time, I was left in my shirt-sleeves, which was viewed with horror by two girls sitting in chairs opposite and wrapped in jackets with fur collars. In General, I managed to sleep quite well, and between rearrangements on the other side, I slowly got up supplies of food, especially for this night, still from home. For those who want to repeat my experience, I would like to inform you that I did not see any open catering points at the night airport. 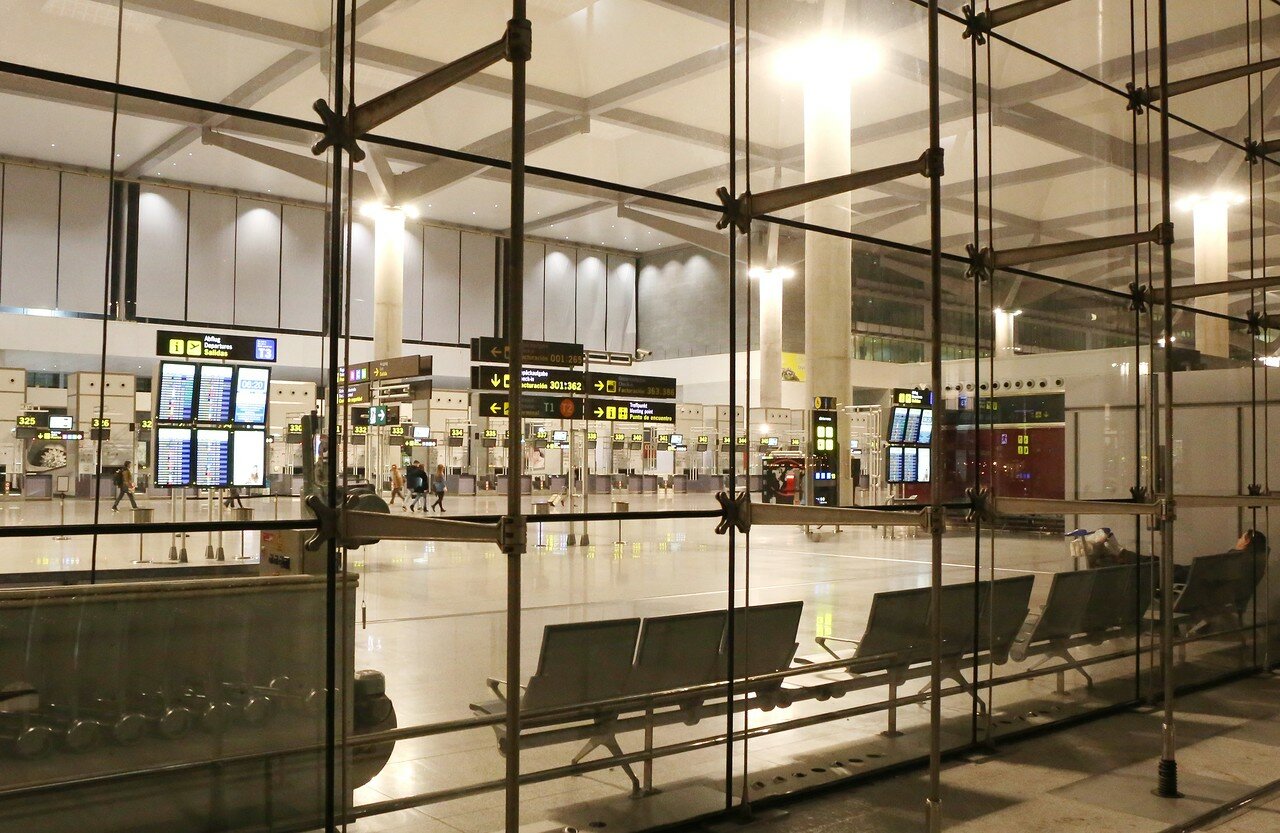 By about 5 a.m., I didn't want to sleep any more, so I went to get acquainted with the airport. The T2 terminal, built in 1991, is named after Pablo Picasso, the most famous native of Malaga. 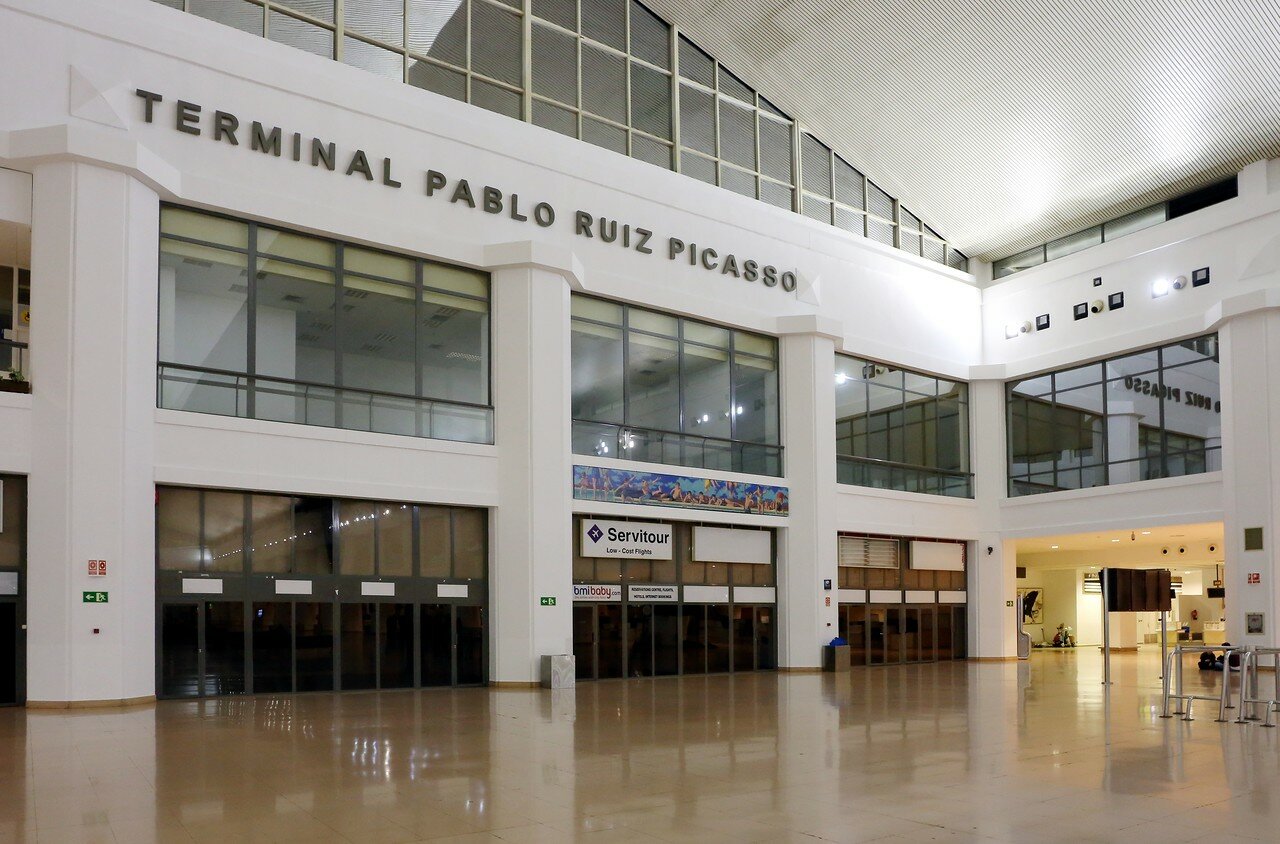 Here the furniture is simpler, and the chairs are not soft, as in T3, but made of perforated metal, and also with armrests. This terminal houses the Aeroflot office. 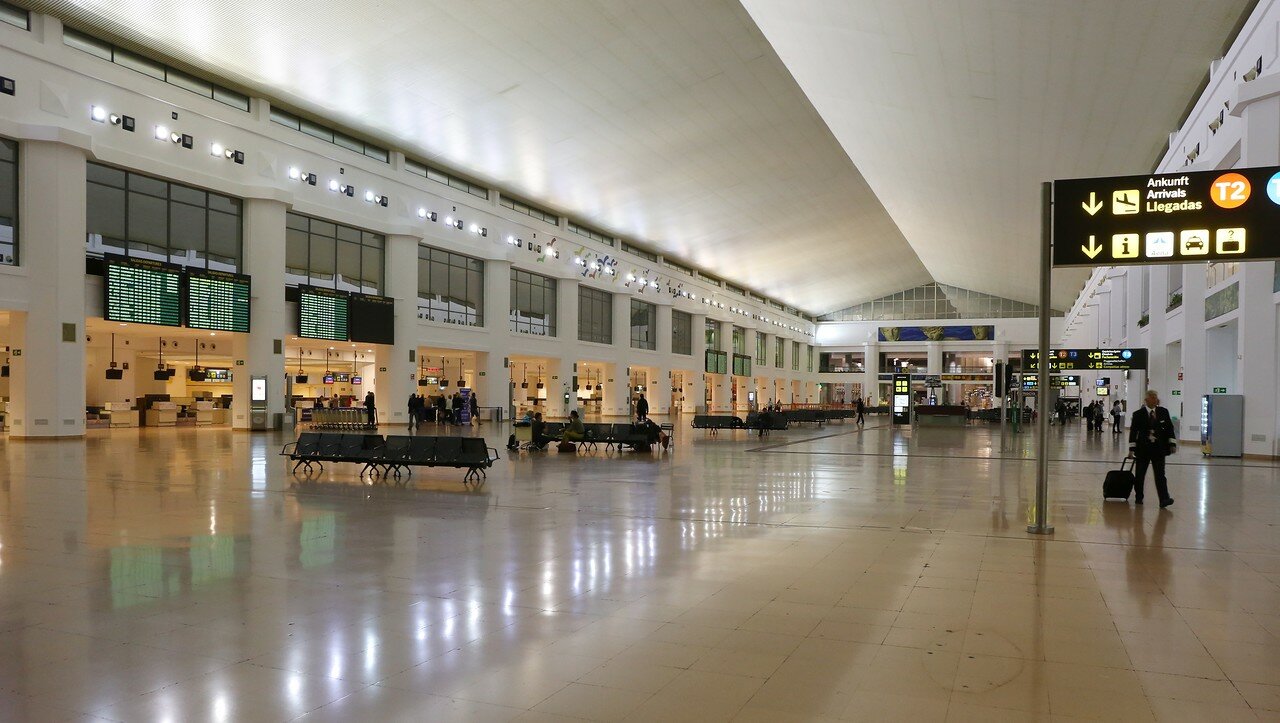 The airport of Malaga-Costa del Sol is the fourth in terms of passenger traffic and the main "beach airport" in Spain. Now the first half of April, before the beach season is still far away, so the airport is quiet and peaceful. 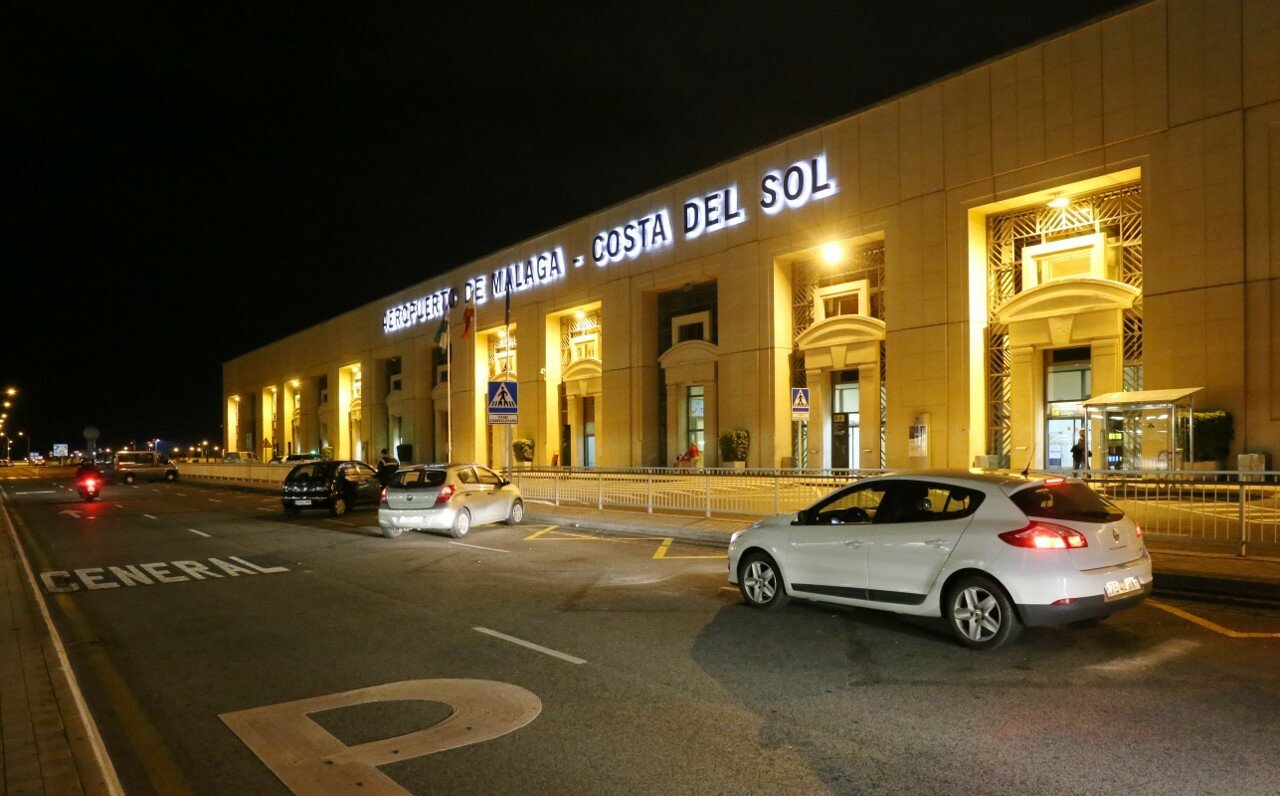 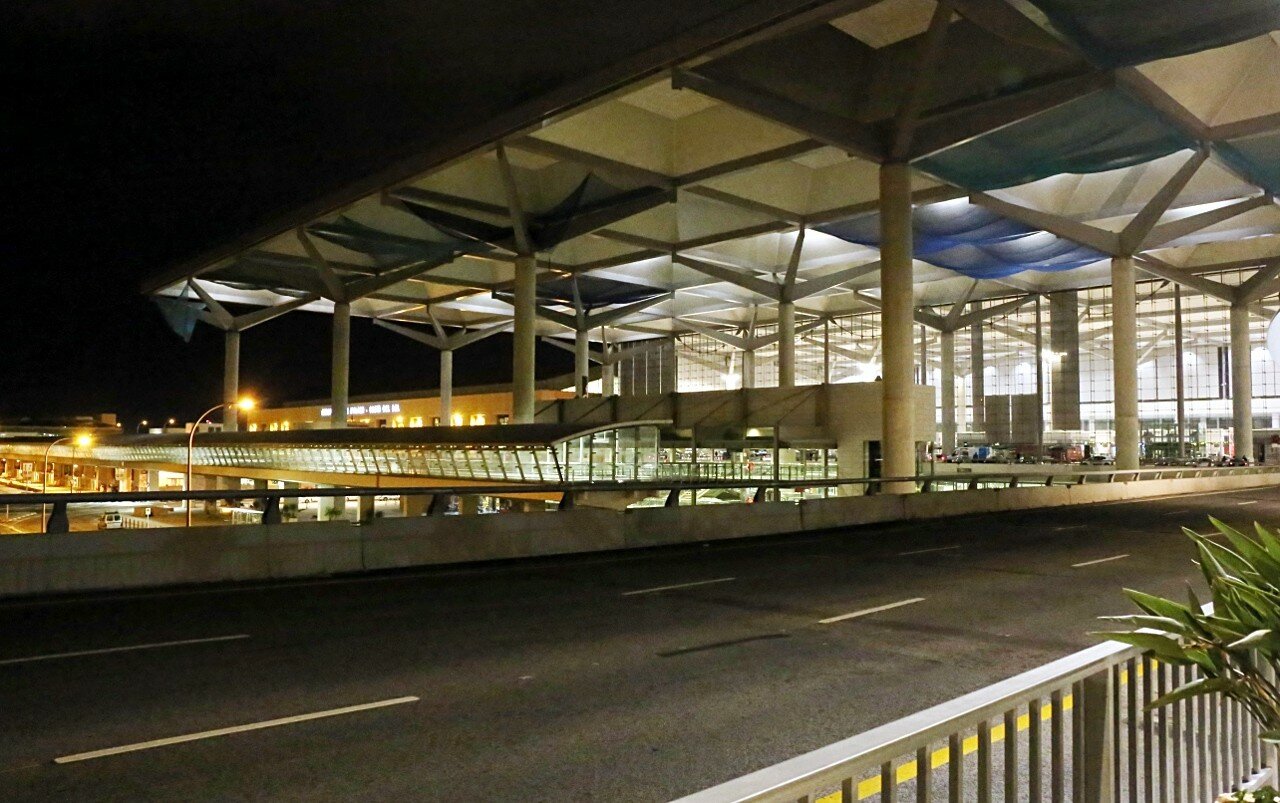 A covered gallery leads from the international terminal to the railway station. The station is located underground, the entrance to the platforms is through turnstiles, as in the metro. The ticket can be purchased at the vending machine, the cost of travel to the city is 1.80 euros, it takes 11 minutes to go. If you need to go to Fuengirola, take the train going in the opposite direction. To Fuengirola, the train takes 35 minutes, and the ticket costs 3.60 €. To Malaga, the first train leaves at 6:44, the last at 0:54, to Fuengirola-at 5: 23 and 23: 42, respectively. The driving interval is 20 minutes. (Map of the málaga commuter rail network) 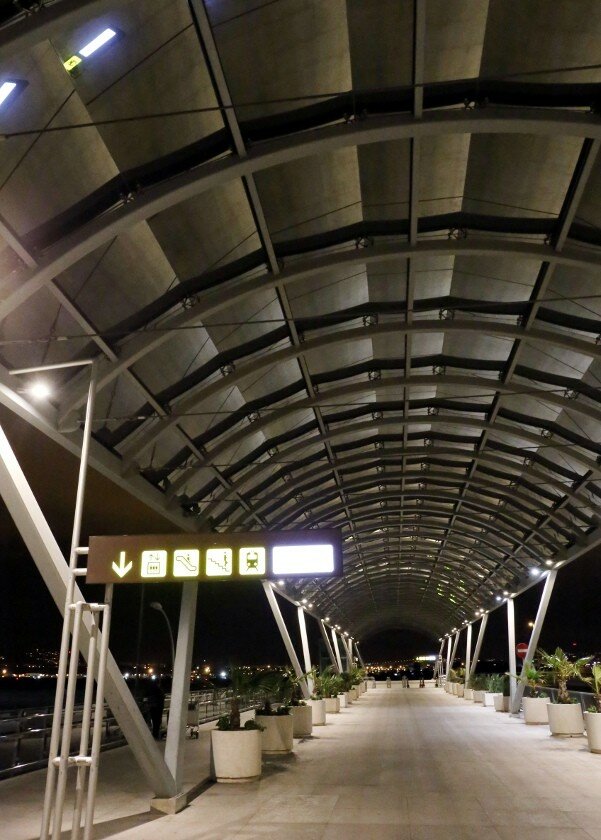 The ceiling of the gallery is covered with mirror panels. 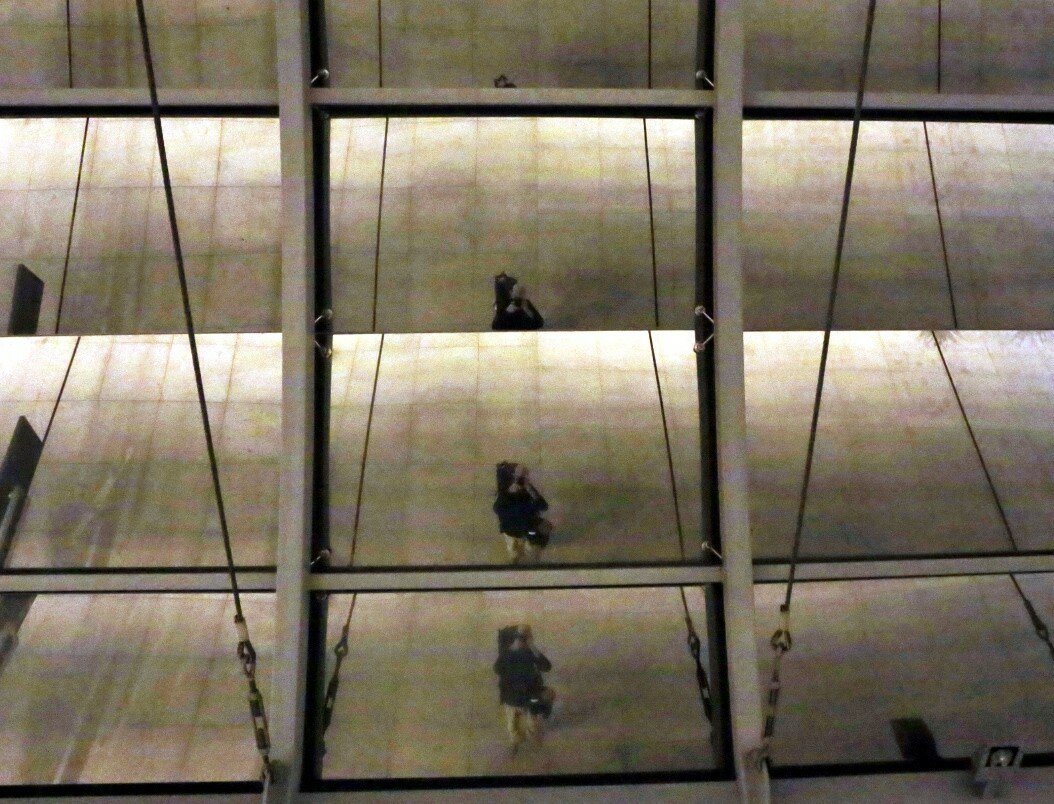 The hope to kill a little time on shooting airplanes was not justified - the darkness categorically did not want to retreat (the sun is already shining with full force at this time). Moreover, when I arrived in the city around 7 a.m., I found it dark and asleep, and only when I reached my residence, the sky began to gradually lighten. 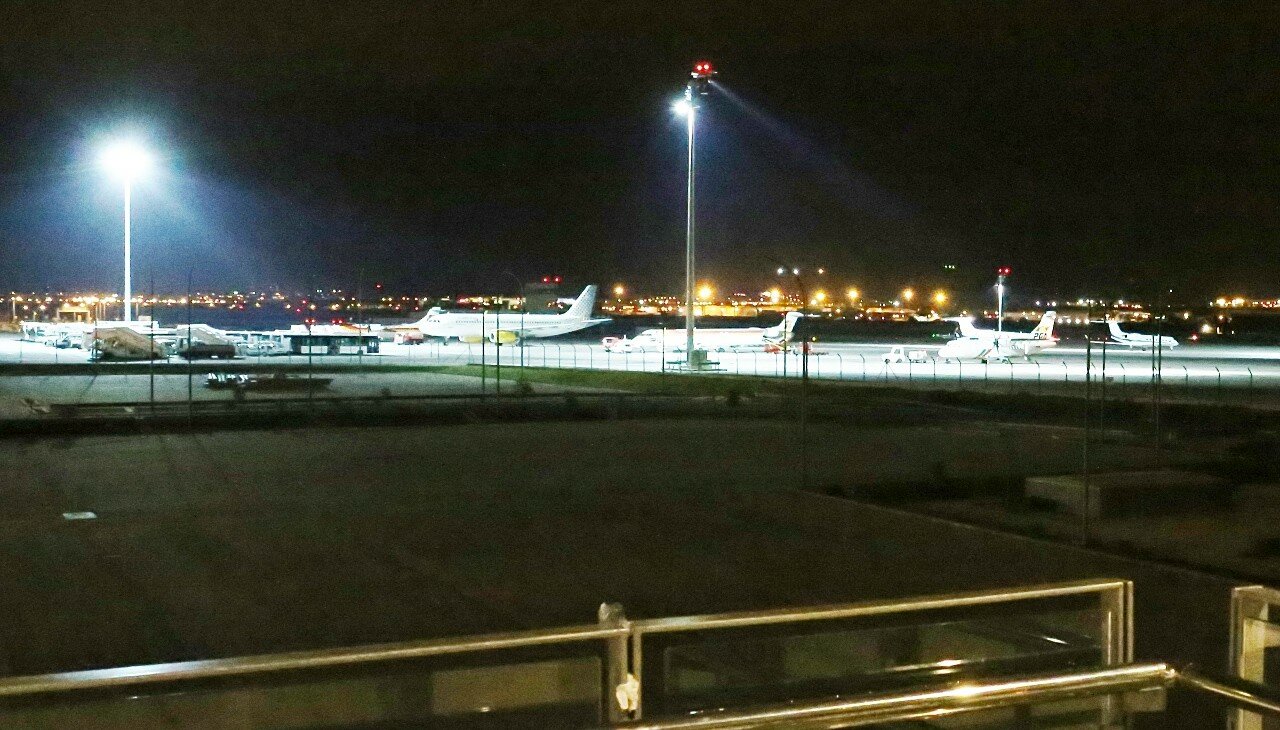