Arriving at Khrabrovo airport 15 minutes before check-in, I was one of the first at the counter, but some delay was caused by the family in front of me, who proved to the staff that their bags fit the definition of "hand Luggage". They were asked to put the bags in a control frame (Sizer), which they did with some effort. The recovery took much longer, even with the help of other passengers, and even airport staff. S7 offers several fares, which differ in terms of free baggage and hand Luggage options. I had a ticket with the "Economy-flexible" fare, which allows you to carry 23kg in your Luggage and 10kg in your hand Luggage, so I did not have any questions at all. After passing the control and inspection, I settled down in the departure zone, outside the Windows of which there was a sleepy landscape - the airport is small, there are few flights. Please forgive the quality, I was too lazy to get the DSLR out of my backpack. 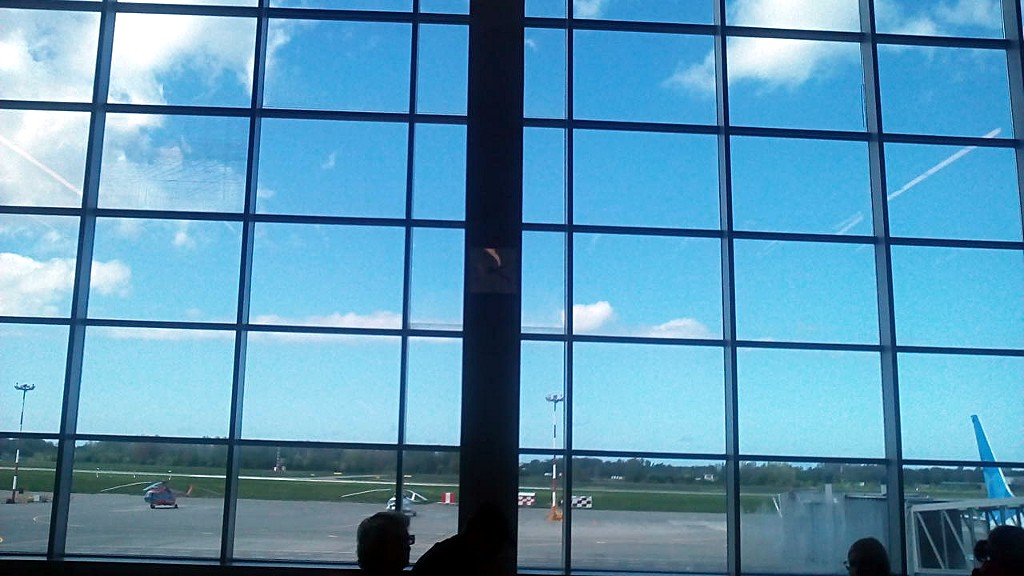 Soon landed and taxied to dock at a gate greenbacks A319 from Moscow, after the release of the passengers and refueling, began a leisurely landing on our flight. 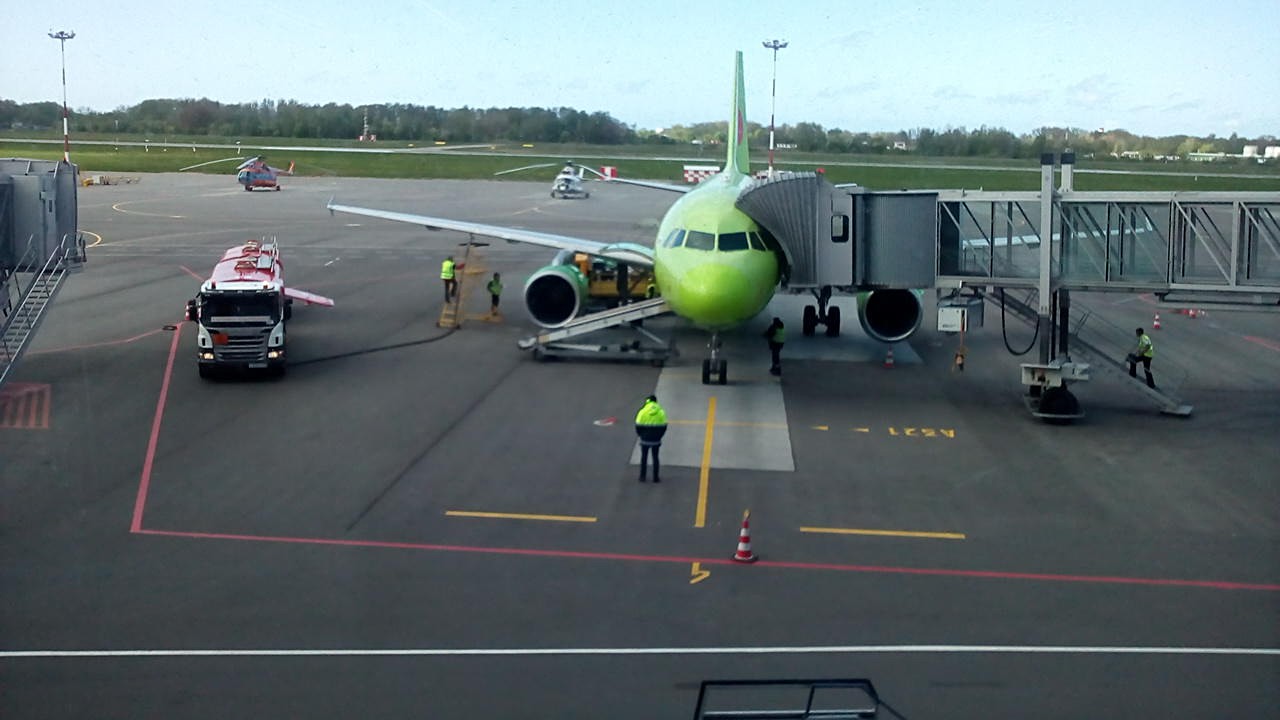 The A-319 is a small plane, so the landing took place without the usual hustle and congestion, and ended exactly on schedule. When the plane rolled away from the terminal building, you can appreciate its modest size. 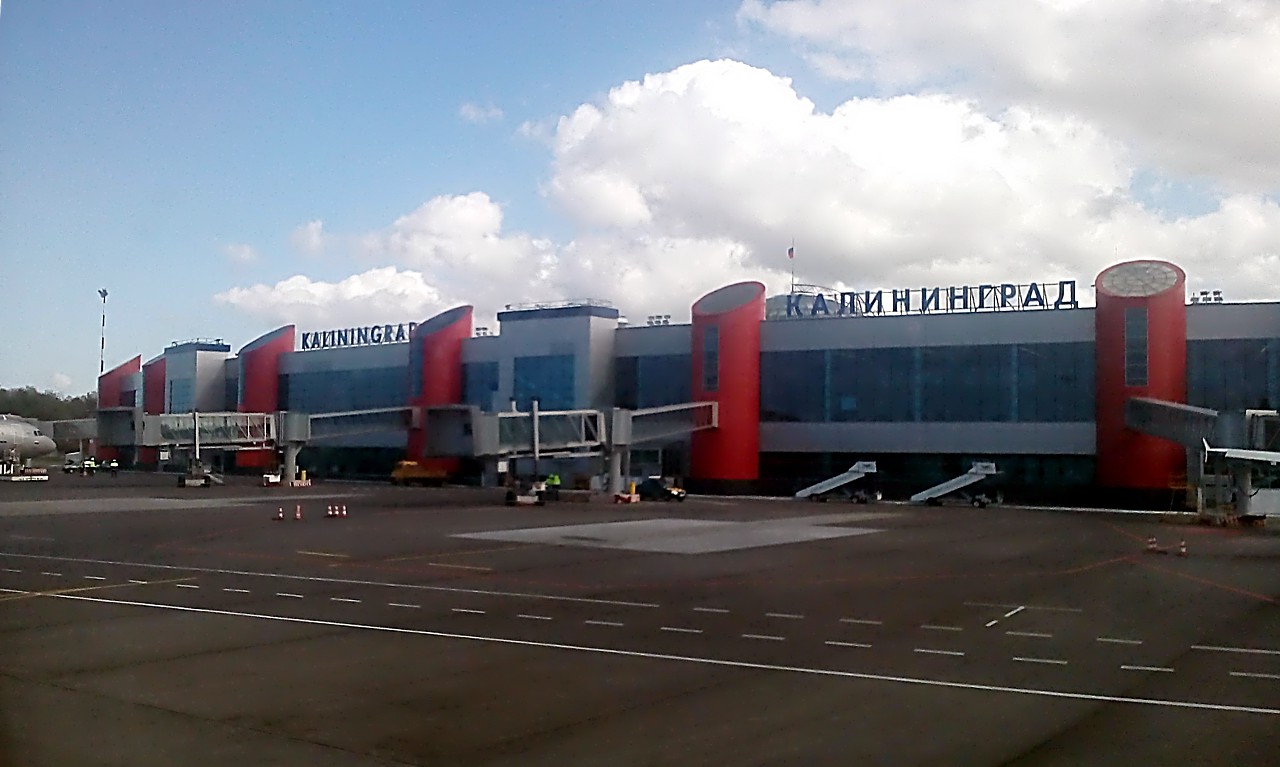 At check-in, as usual, I asked for a seat near the window, and I got a seat behind number 6F, where the wing does not block the view of the ground. 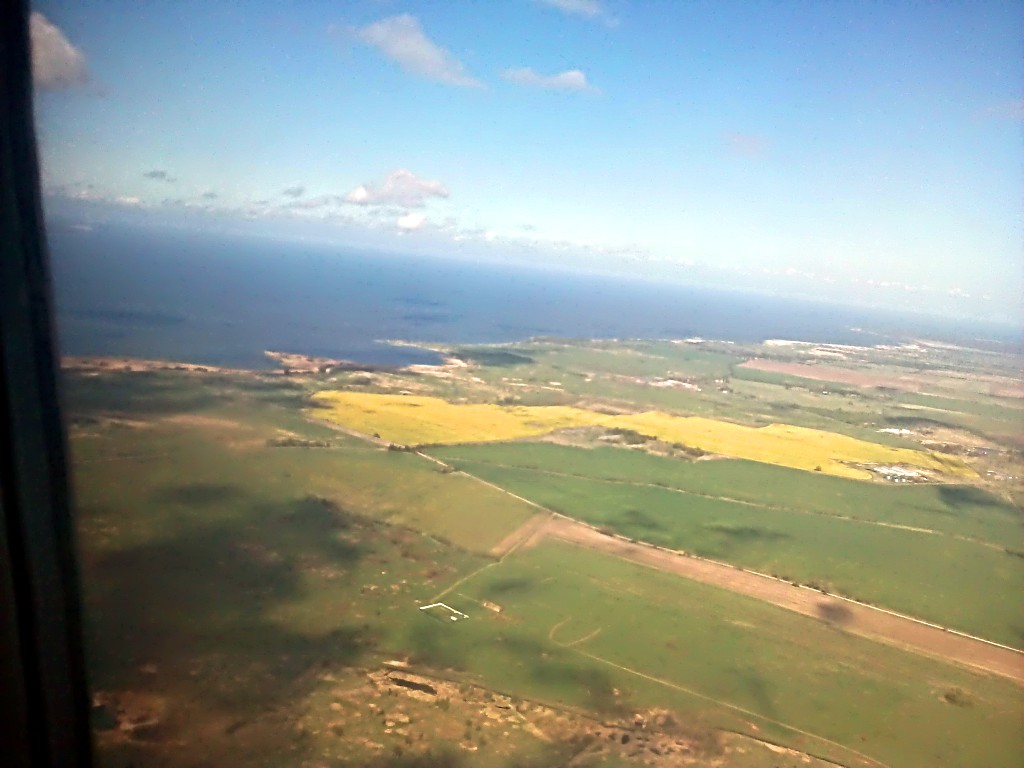 The plane took off in the direction of the Curonian lagoon, over which it turned to the East, at this time you can observe the Curonian spit along its entire length...but on the port side. 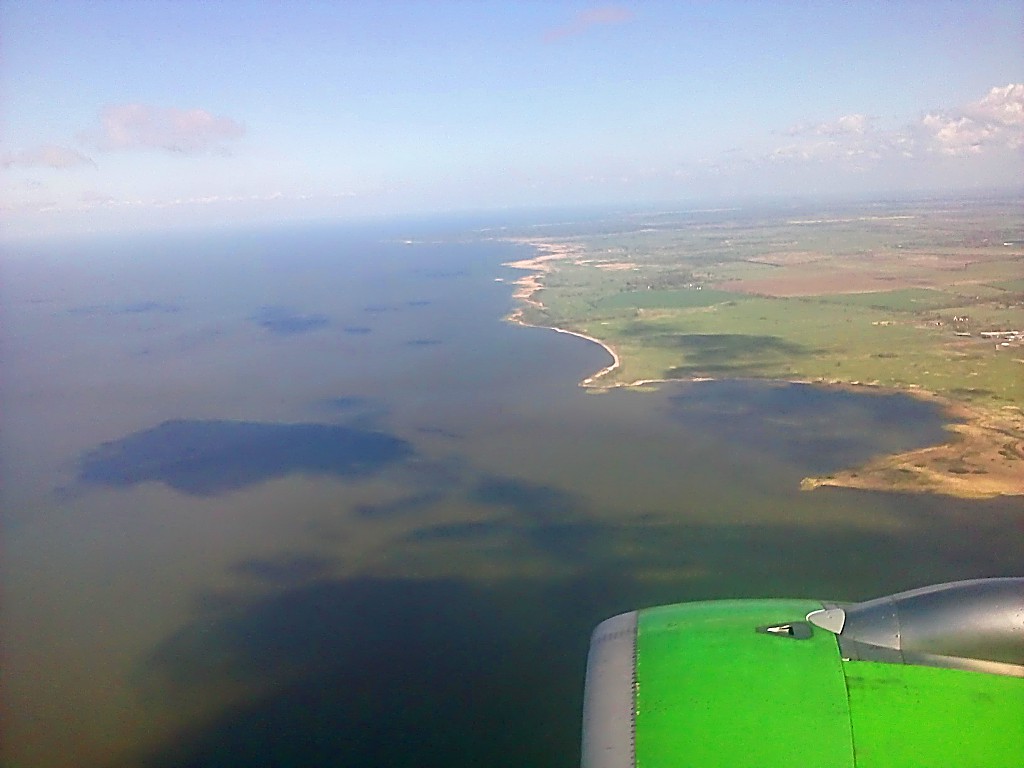 From where I stood, I could see only the mainland coast and the plains of former East Prussia. Here I still got the DSLR. In General, S7 employees are calm about taking photos during the entire flight, which is not true of Aeroflot, for example. 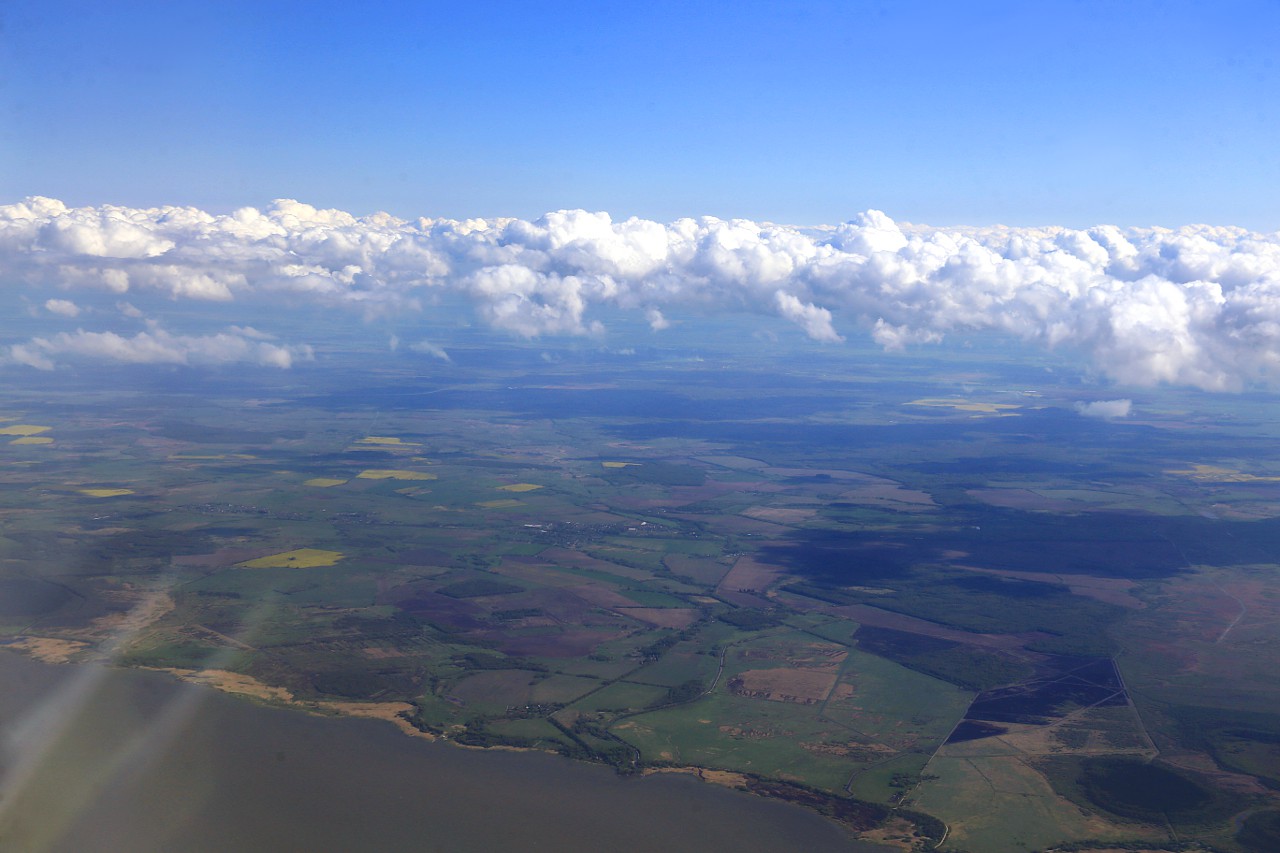 The small fishing village of Zalivino is not well known among tourists, but it is a wonderful holiday destination for those who are looking for privacy, fresh fish and simple communication with good-natured locals. 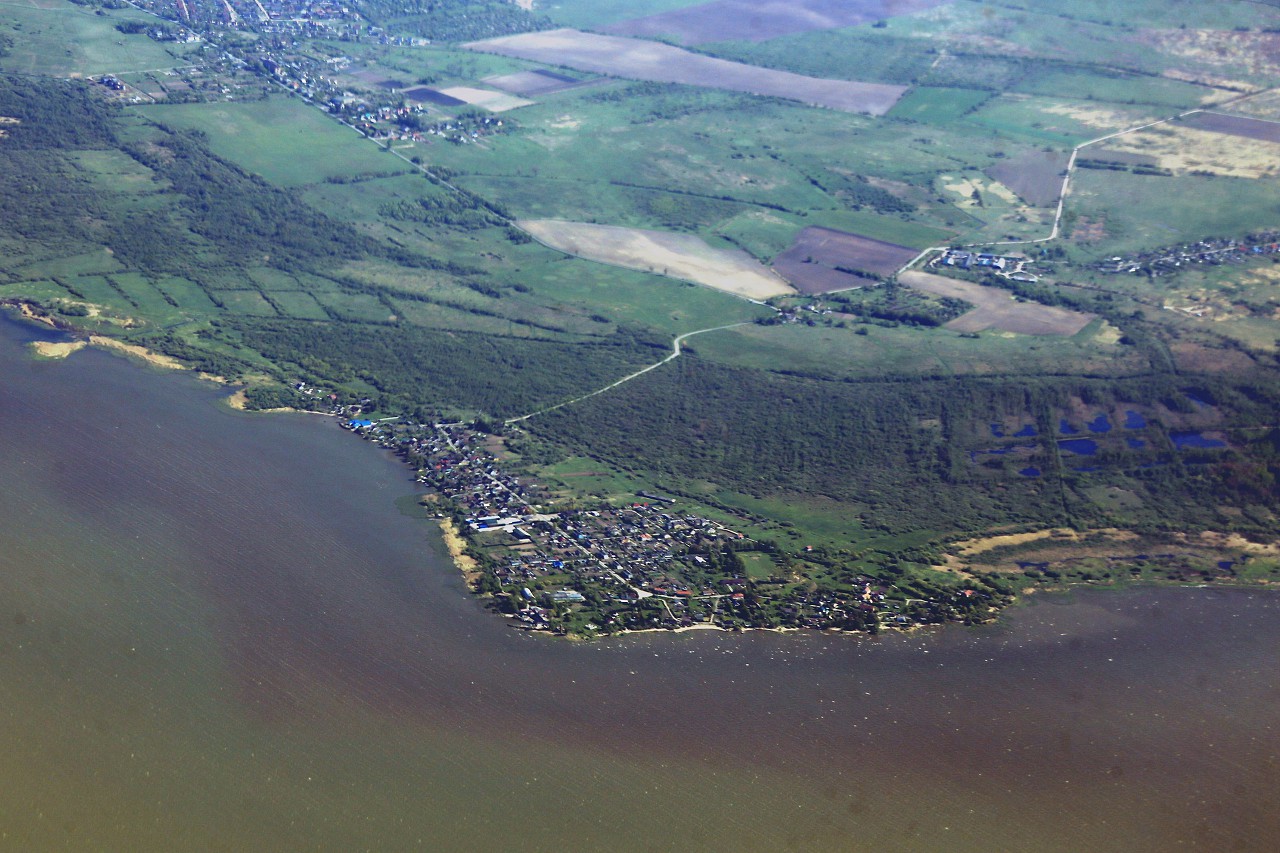 East of Zalivino we can see the mouth of the Deima river, one and a half kilometers up we can see the town of Polessk, famous for the ruins of the Teutonic castle Labiau. 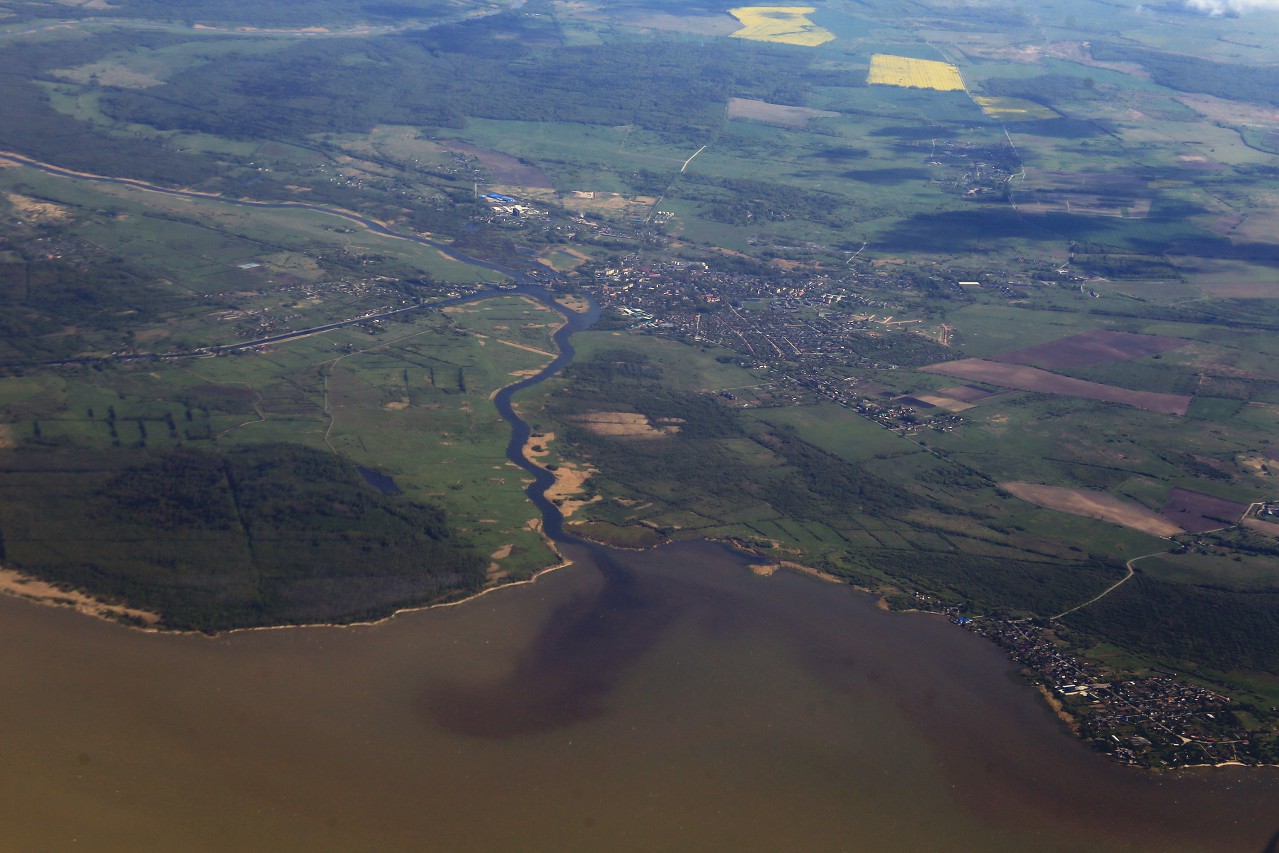 We are flying over the territory of the Kaliningrad region. In some places, you can see the burning of last year's grass, a real scourge of the region in the spring. There is a misconception that fire destroys harmful insects, and new grass grows better on the ashes. maybe this is true, but fire destroys the ecosystem - birds ' nests with egg clutches, small field animals. The authorities have been fighting this scourge for a long time, but without success... 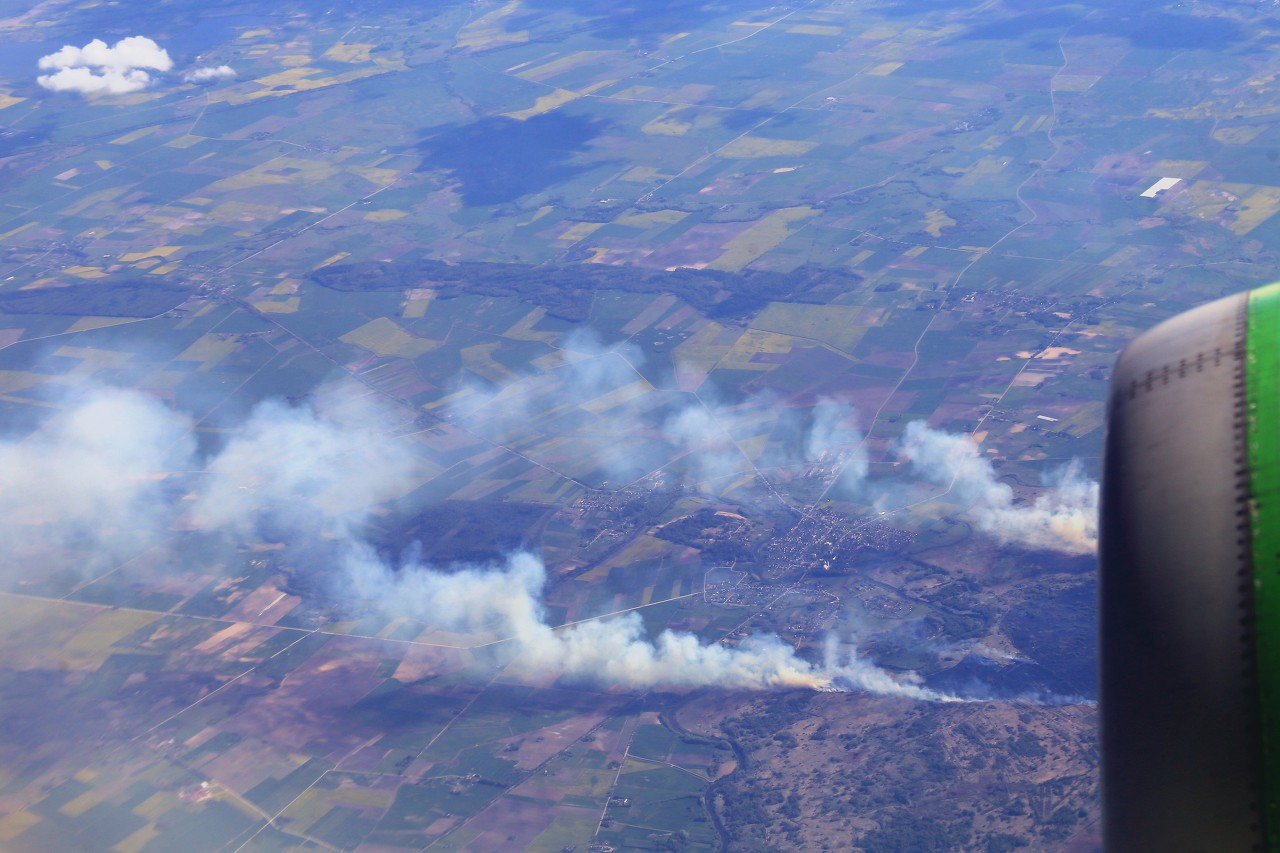 Over Lithuania, the plane completed its climb, and passengers were offered sandwiches (with cheese or chicken to choose from) and drinks - juices, tea, coffee. I must say, this was a pleasant surprise, because at such short distances, many companies limit themselves to cold drinks, or even water at all. 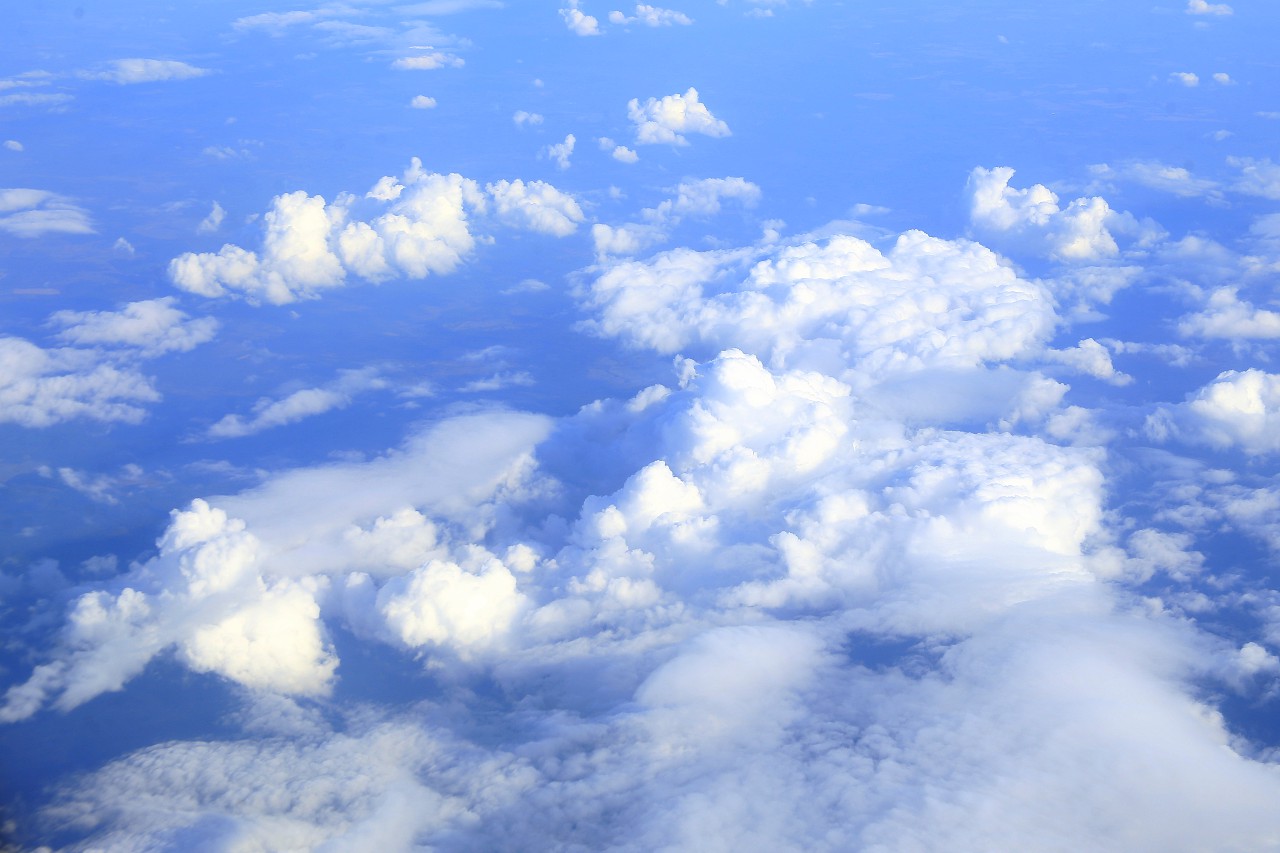 After lunch, there was very little time left before the end of the flight, which was spent in contemplating the bizarre clouds that sometimes covered the earth. 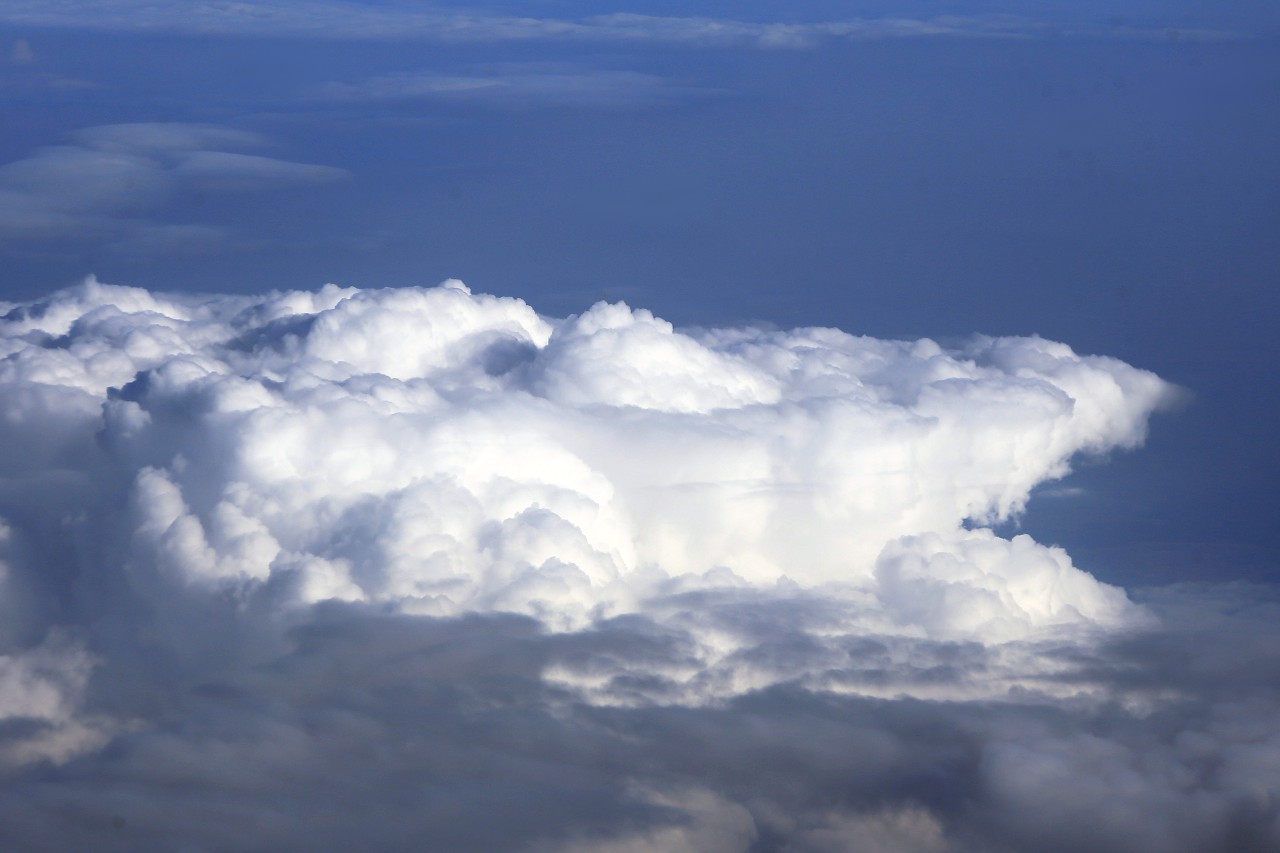 A little over an hour after departure, our plane began to descend, and the southern suburbs of the capital appeared under the clouds. About the approach to Domodedovo airport in the next article. 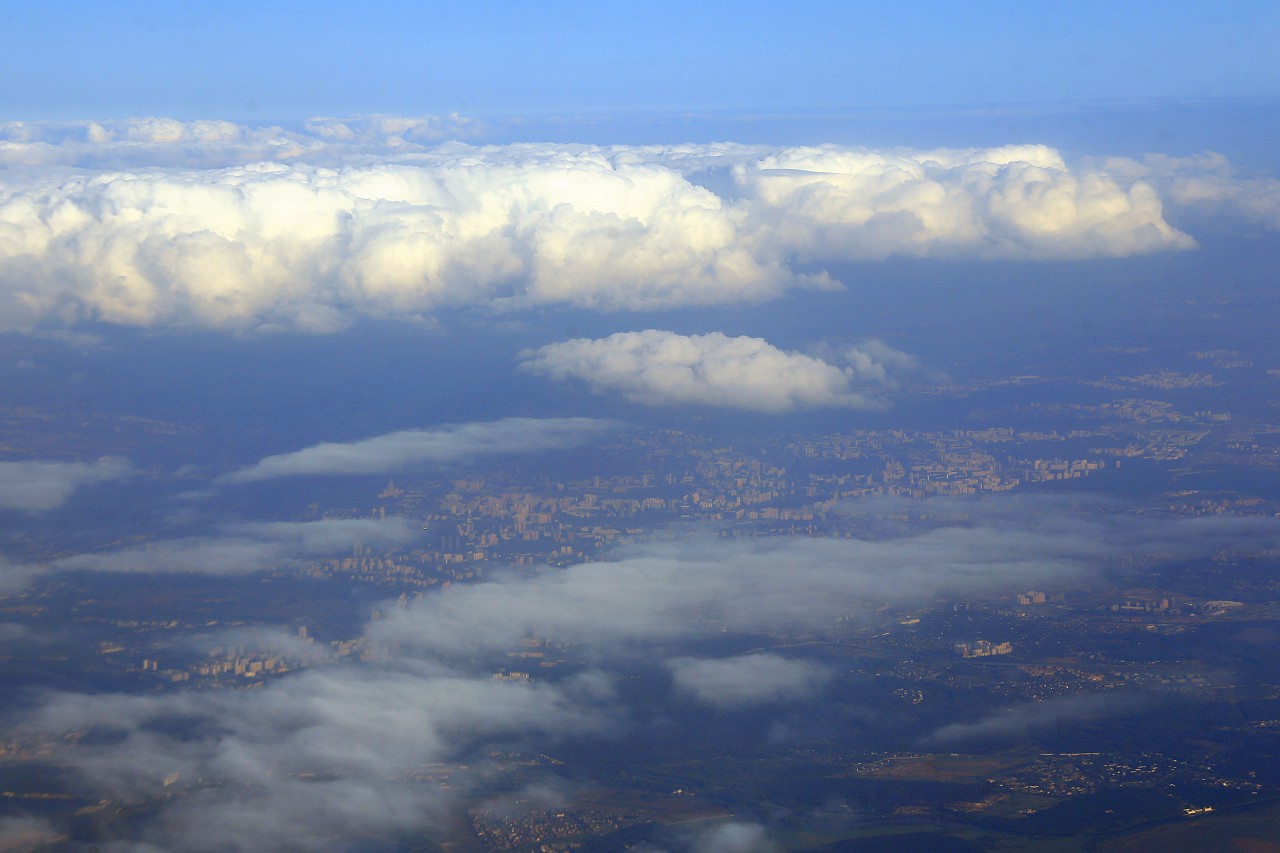 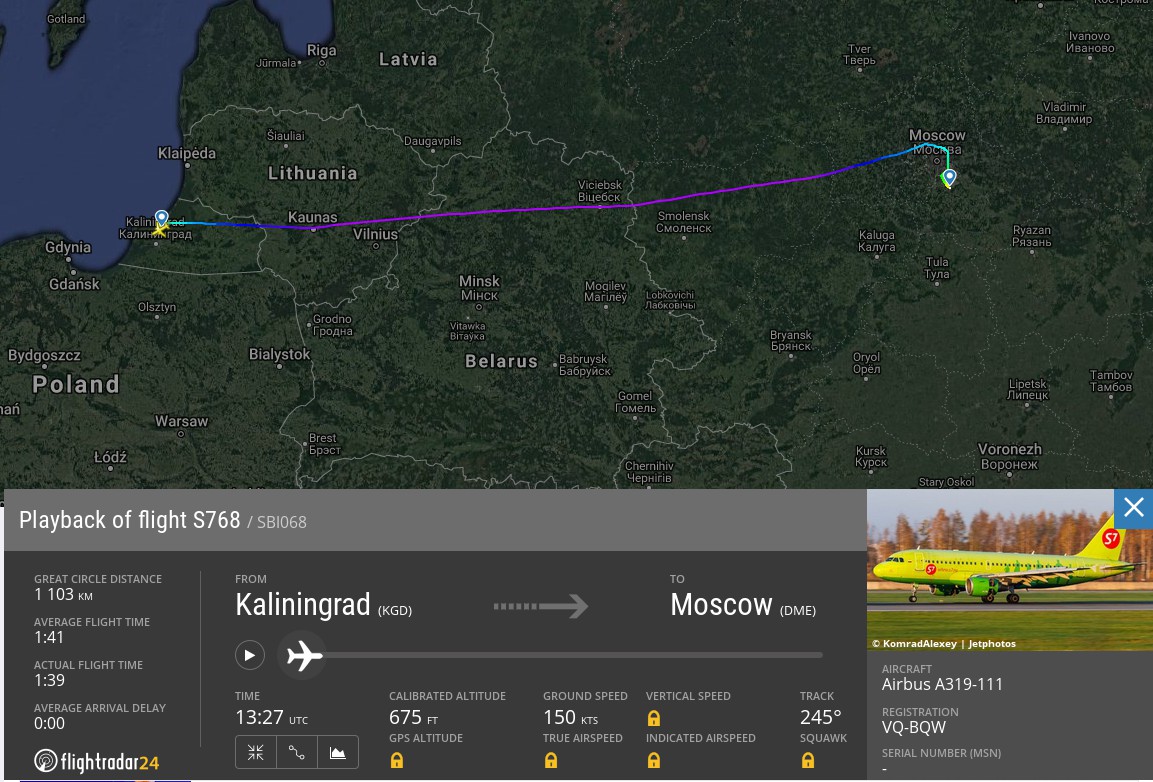